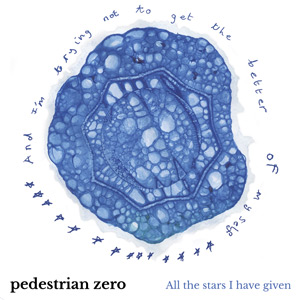 This was a hastily written track. I guess you can count that as a kind of disclaimer. I’m pretty happy with how it turned out, but it hasn’t had any time to bed in yet.

We’d not recorded a song in October as Paul was busy with other stuff, so we had two dates in two weekends booked in for the start of November. I knew what I was doing on the second of those two dates, but nothing was grabbing me for the first.

In addition, I was keen to get Mark in to play some saxomophone, and nothing I had written thus far had a sax shaped hole in it. So I wrote something.

The title came to me the previous week whilst in Scotland. No idea why if I’m honest. Then I sat down on the Tuesday before recording and wrote this. Then we recorded it and it was off for mastering by the following Tuesday.

All the stars.. is a little love song basically. It’s about trying not to be selfish. Which is an ongoing struggle. Not much else to be said there.

All the stars I have given