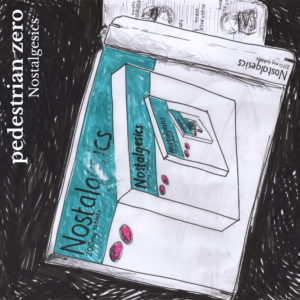 The words to the chorus of Nostalgesics came to me whilst driving. So I had to make sure I remembered them. Luckily I broke down shortly after so I was able to jot them down. True story.

It was originally going to be called Not An Exit, although I forget why. Nostalgesics seems to sum it up better. Sometimes I don’t like explaining songs, because they don’t seem very original, and this is no exception. I am nowhere near the first person to suggest that dwelling in the past is both enjoyable and unfulfilling.

Musically I was trying to take some cues from Ryan Adam’s Shallow. Which is a banger. Hence the bluesy riff. Then Paul came up with an idea for a lead guitar line which I murdered and I did a big Dave Grohl impression over the whole thing. I guess we’re hoping that if you stack up enough unoriginality it equates to something original? Or we were just writing a song.

Also Ant’s train was delayed and we had to finish at 6.30pm. So we had a mad rush to get the bass done in 20 minutes. But we did it!