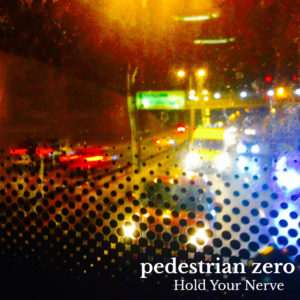 Back in the early (strange) days we’d played a few gigs, but none of them was quite what we wanted a gig to be. So we hired a local hall, got some stupidly large PA and a load of food and tried to be gig organisers. One of the main aims was to meet and hang out with cool local bands. And naturally we called the event Smackbosh.

Our first two choices were 3dBs Down and Star Chamber. We were a bit slow, and it took another 3 Smackboshes (Smackboshopodes?) before One Day Elliott played. In as much as a lot of people we met through Smackbosh are still good friends (and willing to play on these tracks), I think it was a success.

Anyway, I digress. We’ve seen Karl (who was in Star Chamber) on and off down the years, but it never occurred to me that he would want to play on a PØ track. Paul mentioned our little song a month project to him, however, and he was keen. At which point it occurred to me that I could put together a little Smackbosh supergroup. I know, how lame am I? Since I’m writing this, you’ve probably guessed that it all came together.

So this track is Pedestrian zero. But it’s also One Strange Chamber Down.

I had to write something that was balls to the wall (although with the people involved, it would be hard for it not to be). Luckily I had an idea that I put to one side when I was writing 22º Halo and Hold Your Nerve came into existence. In actual fact, Si came in with a cracking bass riff that is now the underpinning riff you hear on the song. Karl wanted in on it when it came to recording the guitars and I’m a sucker for a beastly riff.

I was keen to get Paul’s voice on a track, and I tried to make this a little bit One Day Elliott (or as close as I’d ever be able to get). I had assumed Paul’s range slightly wrong, so the melody was slightly on the edge, but you’d never know – he utterly smashed it.

Lyrically I was a bit inspired by 100 Voices. I think we can win this if we keep on. But even if we lose, if love remains we didn’t really fail. And I guess if love ever fails, we were still on the right side.