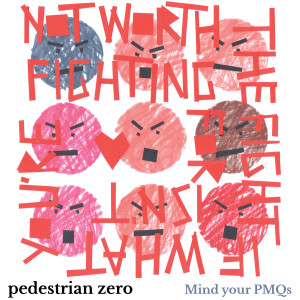 Mind your PMQs was, as you might be able to guess, initially inspired by watching the sometimes juvenile behaviour of people paid to work together to run the country. But it didn’t end there. It became a chance for me to vent my frustration with the bad reasoning, logical fallacy, rudeness, greed, hatred and pride that can (and unfortunately frequently does) bleed into public debate.

This isn’t to say that all public debate is like this, and the song is definitely not aimed at any specific politicians, parties, journalists, papers or media moguls. We need to try and work together and find common ground, and if you’re trying to make things better you should be constantly questioning the way you interact with others and making sure you’re not using bad reasoning, logical fallacy, rudeness, greed, hatred and pride.

It was great to have more new musicians (new to working with me that is) help out with this one. Namely Ant Martin and Matt Oastler. We had a guide guitar and vocal in place before we recorded anything else and it was so weird and great to see the melody change shape on the basis of the music they laid down. We didn’t change the melody, it just sounded totally different with the instrumentation. Plus we had a great extra session getting some luscious harmonies going.

Finally I should mention that I did use some “bad” language in this song. We have consequently created a censored version for those who would take offence to that language.