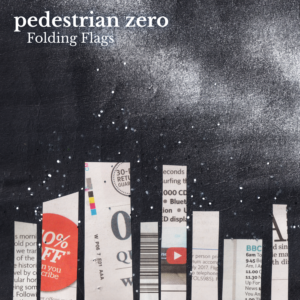 You know that thing about how people talking about their dreams is boring? I’m kind of hoping that then putting dreams into songs makes them less boring. Otherwise I’m screwed.

Actually I’m not really screwed. I didn’t transcribe it or anything. And getting Paul West, Ant Martin and Phil James to play on a track is a proven antidote for boredom.

I don’t really remember much of the dream in any case. Just that it took place in some kind of army installation and there were people arguing about what was the correct way to fold flags and just across the way someone got killed accidentally by a helicopter. Then I woke up. And to my still-sleep-addled brain this seemed like a strong metaphor, so I wrote it down as a song title – Folding Flags.

Ant Martin has done a lot of bassing for me these past couple of years, but he usually has to shoot off after recording the bass because he’s in demand. I managed to bag him for a whole day this time, so it was good to get his vocals on a track. And he brought an unexpected bonus with him – Phil James. Phil is a professional guitarist and he transformed the song completely (ref: an acoustic only version) into an 80s/90s rock beast.

Not much else to say about this one. I released it on Christmas Day because I could and I thought it would be fun to have that as the release date. I should probably write a book about bad marketing ideas. Wouldn’t it be ironic if it sold?