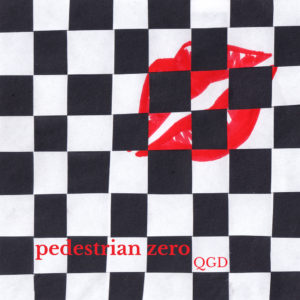 What to say about QGD? This song, to be honest, felt a bit rushed. I’ve been busy. Kinda.

I went on Kieran’s internet radio show mid January and covered It’s the end of the world as we know it by R.E.M.. I’ve played that song a lot and I was trying to make it slightly more interesting by sliding up to a little inversion on the Am chord. This, shifted up a few frets with a capo, then became the basis for QGD, which I found myself writing not long after doing the radio show.

I’d booked up Karl Addy (who also played on 22º Halo and Hold Your Nerve) to play bass and electric guitar and I’m pretty relieved that I did. I think he’s given it a little pop rock edge which works well. I’m a lot more pleased with this song (from a writing perspective) than I thought I would be.

I won’t say too much about the theme of QGD. I probably write too many songs about a nebulous they/you. Hopefully I don’t come across as paranoid or whiny. I find it the easiest way of addressing frustrations with society and/or myself. I’ll leave you to unravel which are which.