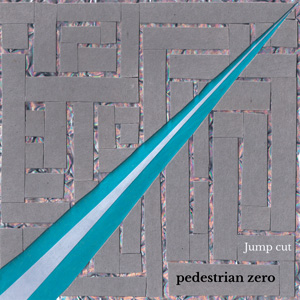 We recorded Jump cut the week of the US presidential elections. I actually wrote the song 4 years prior to this. It was weirdly relevant.

I’ve been oddly proud of this song, and, as with a fair few of the PØ songs, it didn’t seem to fit with strangeday or Roo’s Radio. So it was on my vague mental to-do list for this year. I’d decided I’d like Si Fawcett‘s input on this one, so I actually held off recording it until I could get him into the studio. I wasn’t disappointed. Along with the bass, he contributed some cracking harmonies and a really cool vocal loop.

The other thing that I’d got into my head was that I’d like to start the song with ‘fake’ drums, before opening out into the real thing during the middle 8. I’ve never been much of a drum programmer, but I gave it my best shot using a program called EZDrummer. The idea was that the first half of the song was to be kind of claustrophobic and artificial, mirroring the lyrics. I think that despite the time/money limitations we’ve got there. When Paul’s actual kick drum… um… kicks in during the middle 8 it really works.

The song itself is an attempt on a commentary of modern politics/religion/commentary etc. It’s worryingly becoming more pertinent as the years pass. We’re so sure of our views, and we trust the things that back those views, whilst disparaging anything that opposes them. We’re openly distrustful, even of photographic or videographic evidence, as we know this can and will be faked all the time.

But as I’ve said before, we’ve got to find a better way.

I genuinely don’t feel the need to defend the choice of language on this song. But if you’re interested in an explanation rather than a defence, I don’t feel that alternative words I could have used fully express my exasperation at the level of confidence certain parties have (or appear to have) in their beliefs. I’m aware that I’m in danger of coming off like a petulant teenager, but there you have it.