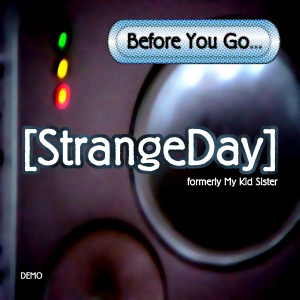 The difficult second… demo? We’d graduated from living room to local school hall. As with Blink and Miss It and more You than me we recorded with our friend Colin, a man with enormous talent, patience and capacity.

This demo only had four songs, one less than our previous demo. I believe this is because we’d only written another four songs in the intervening period. This time I managed to contribute three of the four, although again, they all got hammered into shape by all four of us. Also Aaron had written half of the words for Enemy of the state as I ran out of steam halfway through.

The title came because we were theoretically breaking up. Aaron was headed to uni in Derby. I was heading down to Brighton. But we were so pleased with this demo and with how things were going that we stayed together and did the long distance band relationship thing instead.

This remains my favourite of our earlier demos. It still (to my unseasoned ears) sounds fantastic. We were well rehearsed and did a great collective job of writing and arranging these songs. The demo nearly led to two videos (for Enemy of the state and I am ready if you’re interested), but we never quite got enough footage and there was no youtube in those days. Some of the footage from I am ready made it into the launch promo though.