It was a year and two days ago, on the 16th May 2015, that we started a full week’s work on The Way Home – the Roo’s Radio debut album. It marked the first time that I had worked full time, albeit for a week, on a music project.

In actual fact, what went into that album was so much more than just that one week, as I’ll tell you more about next time, but spending concentrated time doing a project like that is always going to stand out as a special time in your memory – good or bad.

Recording an album is an interesting business. There’s a lot of hard work, but also a lot of potential boredom: waiting your turn, setting things up, getting something wrong over and over again. There are high points and low points, but you’re always striving to ensure that the best bits make it onto the record.

Prior to going in to the studio I had recorded a bunch of the guide tracks. I believe I finished recording these on the morning of Saturday 16th, and we then did a bit of work on the guitar for Flicker. Already the exact sequence of events is fading from memory. Flicker was definitely the first song we worked on though.

Paul wasn’t around in the afternoon of the 16th so we did some final bits of writing and got some rest for the week ahead.

We’d booked in a drum day on the Monday, so we spent Sunday on Flicker and possibly another song we didn’t have drums on.

Monday morning was spent setting up the live room for the drums, and then Paul stormed through the drums for six songs in one day. The last song of the day was Dream Again. Paul had to leave for a gig or practice and was right up against it to get the song done, but true to form he smashed it out.

For the rest of the week we had to try and get through as much as possible. Generally speaking we had to get bass and guitar sorted before we did vocals, so we’d spend mornings doing the instruments and afternoons doing the vocals. None of the lead vocalists were drinking alcohol, milk or caffeine so there was an awful lot of herbal tea drunk that week. And lots of vocal warm-ups and vocalzone to look after our voices.

For fun we hooked up a live webcam during the week. We didn’t have a huge number of people checking in with it, but the footage (unfortunately without sound as we didn’t want to broadcast our numerous mistakes and dodgy conversations to the internets) was saved. We edited some of it into this video, but perhaps one day we’ll do more with it.

Most days we’d decide on a plan of action for the next day. We didn’t plan anything too far ahead and just went with how we were feeling.

We had a chart of things needing to be done and it became clear as the week went on that we weren’t going to make it through everything. We still had 2 days of time booked with Paul, so as the week went on we tried to find some more time where all five of us were available. One of those days was in July and the other in August.

The last afternoon/evening of the week saw us working on However. It was pretty emotional because it was the end of a great week. And However is quite an emotional song that means a lot to all of us, especially Claire. So she poured her heart and soul into that vocal, which was the last thing we recorded in that week. Every one of us shed a tear during that performance. Magic.

Then we decamped back to mine where everyone including El piled into wine and cheese, breaking our alcohol/dairy prohibition. And that weekend was the first NAGfest where we played a set.

What a week! Below is a fun infographic I made to show what went into the week. There’s quite a few in-jokes there, but I think you’ll be able to appreciate it. 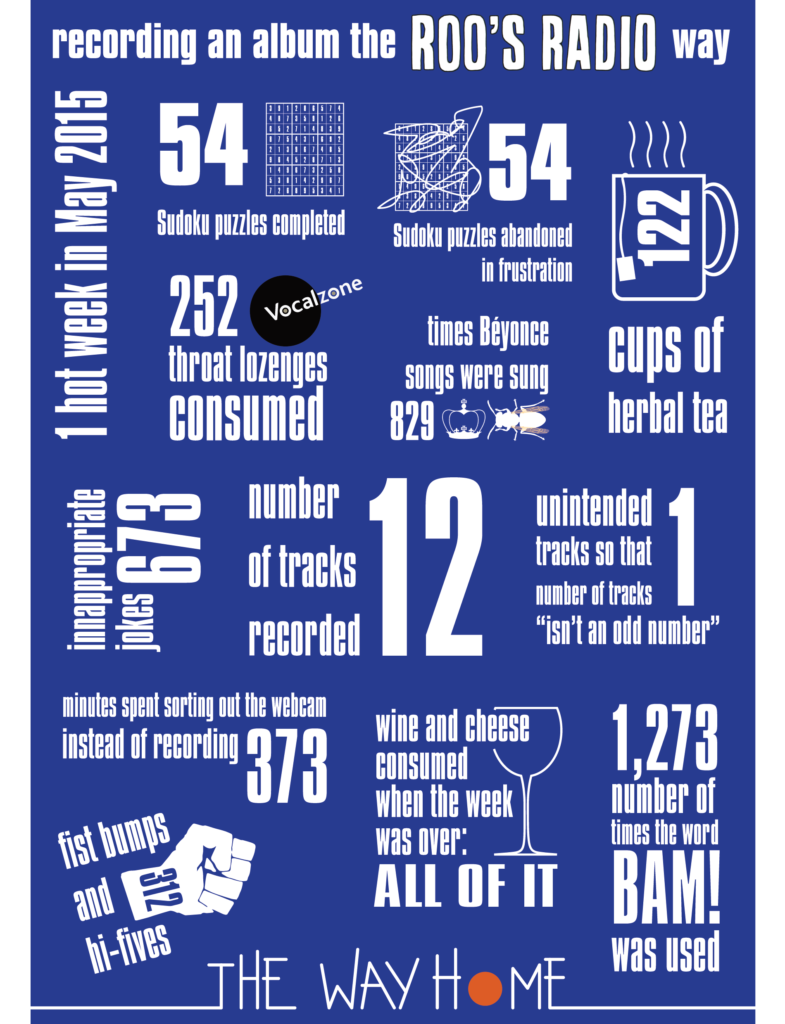